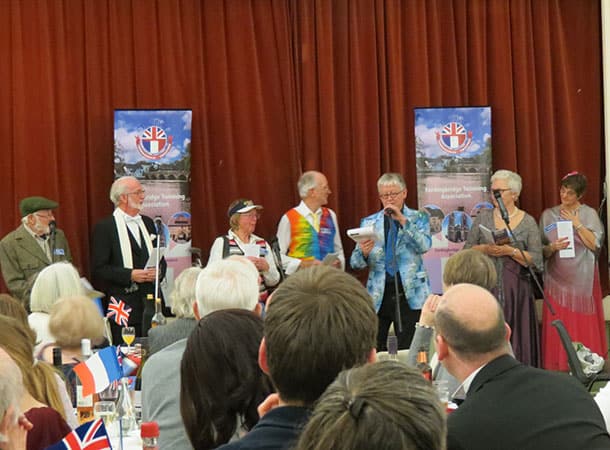 The next Fordingbridge Twinning Association event will be the AGM on 26th April, at 7.30pm, and everyone is welcome.

As we all know, this year, 2018, celebrates the centenary of the end of World War 1, and there are other important events in history, to celebrate too, including (some) women winning the right to vote and the installation of London’s first traffic lights!

Entries for the Youth competition entitled “100 years” are now in, and the standard is extremely high!

The judges are all hard at work.

The results of the Youth competition will be announced and Malcolm Connolly, Fordingbridge Town Mayor, will be presenting the prizes.

Additionally, there will be refreshments, and the company of some very interesting people.

Do be there: Thursday 26th April, at 7.30pm, at Fordingbridge Town Hall

The annual “Sandy Boules” competition will take place (at the Sandy Balls Estate) on Thursday evening 21st June (the longest day this year) and then of course, there will be the Twinning’s annual visit to Vimoutiers, in October, immediately followed by the (again, always a sell-out) Musical Soirée”, which this year will feature the same band as last year (“Blue Tides”, which was so popular), on Saturday evening 27th October, in Fordingbridge Town Hall, featuring the genuine French cuisine, which will have been purchased in Vimoutiers only one week before.

For further details, do contact Derek Ayling, Publicity Officer, on 01425 650770, or by email, at  hippotrain@btinternet.com