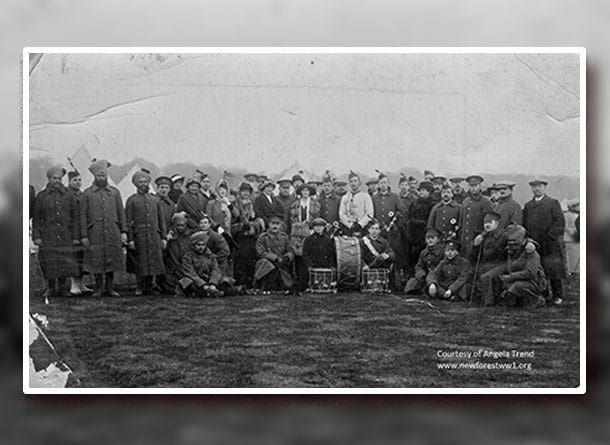 Little survives today of the industries, camps, hospitals and training areas which took over the Forest during the Great War of 1914 to 1918 and the impact it had on local residents.

Working with local history groups, archaeologists at the New Forest National Park Authority have gathered photos, documents and personal accounts of how the Forest was transformed as it played a vital role in the war effort.

They are available to view at a New Forest Remembers WWI exhibition at the New Forest Centre, Lyndhurst, from 6 February to 1 May and online at www.newforestheritage.org. The exhibition panels will then tour other New Forest venues during 2016.

This project builds on the successful World War II project run by the National Park Authority and supported by ExxonMobil and the Heritage Lottery Fund.

WWI project officer Gareth Owen said: ‘With the start of World War I in 1914, thousands of British troops were recalled from across the Empire and locations were needed to accommodate them across the south coast near to the ports of Portsmouth and Southampton, so many ended up in the Forest.

‘There are stories of columns of marching soldiers heading off from camps in Lyndhurst to Southampton docks where they boarded ships to go off to war; of over 21,000 troops from India and New Zealand convalescing in make-shift hospitals at Brockenhurst; the Royal Flying Corps stationed at East Boldre; and even a training school for dogs who carried vital messages in battle.’

Alison Jones, Community Affairs Manager at ExxonMobil, said: ‘As a major employer in the New Forest area, ExxonMobil at Fawley is committed to investing in community projects and initiatives in the region. We’re delighted that we can support this First World War project to help highlight the New Forest’s significant role a century ago and would like to thank all the community groups who have contributed to the exhibition and online archive.’

WWI and WWII stories and other findings are available via the growing online interactive archive www.newforestheritage.org. People can register online to share their findings and contribute to telling the Forest’s story during World War I or are free to browse the wealth of information already uploaded.
The groups which contributed to the exhibition are: