Winners at the AGM 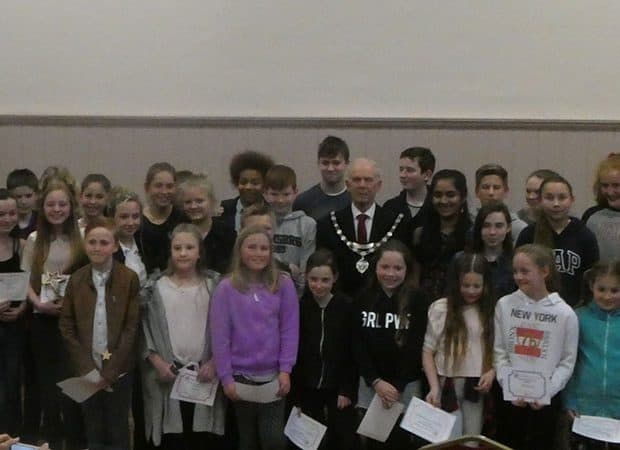 Last Thursday evening (26th April), saw the advent of the AGM of the Fordingbridge Twinning Association, with well over 100 attendees.

This was not least, down to the fact that the results of the annual schools’ competition results were announced.

The picture illustrates Malcolm Connolly, Mayor of Fordingbridge, with all the winners, after presenting prizes to them.

This year, the theme was “100th Anniversaries”, and not surprisingly, there were numerous entries related to the end of WW1.

After the presentations of the prizes, refreshments were provided, before reconvening for the general business of the AGM.

Last years’ very successful 35th anniversary of the Fordingbridge Twinning Association, with nearly 100 visitors from France, was discussed in depth, as well as other amusing incidents and events.

The treasurer announced that the annual subscripting would continue to be on a “per-household basis”, and this would be £10 per annum, per household.

The committee for the forthcoming year, was elected, and future events were announced. These are:

a) The annual Boules event during the evening of Thursday 21st June (so put it in your diaries) This will be held at Sandy Balls, at Godshill: hence the name “Sandy Boules Tournament”!

b) The regular visit to Vimoutiers (twinned with Fordingbridge) over the weekend of 20th/21st October, at Vimoutiers, for their annual ”Foire de la Pomme” festival. Vimoutiers is one hour from Caen, by car

The food and drinks will have been purchased in Vimoutiers, during the immediately preceding weekend: Genuine French fayre then!

d) The regular Murder Mystery evening will take place during the following February (2019) on Saturday 9th February: something else to look forward to!

For further details, do contact Alison Ayling, Chairman, or Derek Ayling (publicity) on 01425 650770, or by email, on hippotrain@btinternet.com