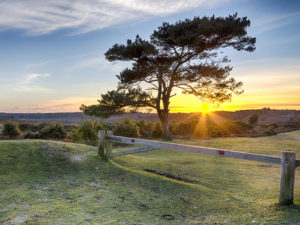 New Forest organisations are appealing to people to please respect and care for the National Park and follow the New Forest code.

There is a severe fire warning currently in place across the whole area.

No barbecues are allowed and people are asked to please take extra care.

The National Park Authority says the same could easily happen in the New Forest which is internationally-protected because of its rare wildlife and habitats.

National Park Authority rangers, the Police and New Forest District Council staff were all out across the Forest and coast last weekend and will be patrolling again over the bank holiday.

Over the 220 square miles of the National Park together they dealt with numerous barbecues which had been lit despite clear ‘No BBQs’ signs.

They also intervened in many situations where people were petting and feeding ponies, explaining how dangerous this can be both for people – as the ponies aren’t tame and can bite or kick – and for the animals.

A wide range of other issues were addressed including litter, disturbance of rare ground nesting birds and overnight parking.

New Forest National Park Authority Chairman Oliver Crosthwaite-Eyre said: ‘We are appealing to people to please follow the New Forest Code and in particular to warn that barbecues are not allowed as there is a high risk of forest and heathland fires.

‘We are very concerned about the amount of verge and gateway parking in recent weeks, and especially over the weekend and are asking people only to park in designated car parks.

‘Verges are protected wildlife habitats too and are an important source of grazing for ponies.

‘In line with Government restrictions and to ensure public safety, local attractions, pubs, campsites, restaurants and hotels remain closed, along with public toilets. We ask that people observe the social distancing guidelines.’

Cllr Alison Hoare, Portfolio Holder for the Environment at New Forest District Council, said: ‘We have been reviewing how and when we re-open our facilities whilst still keeping people safe. It’s a balancing act, and we would ask people to use common sense and to treat the area with respect.

‘Of course, we do want people to be able to get outside and enjoy our coastline and open spaces, but would urge everyone to continue staying at home as much as possible to stop the spread of the Coronavirus, but if outside, to follow all the guidance available.’